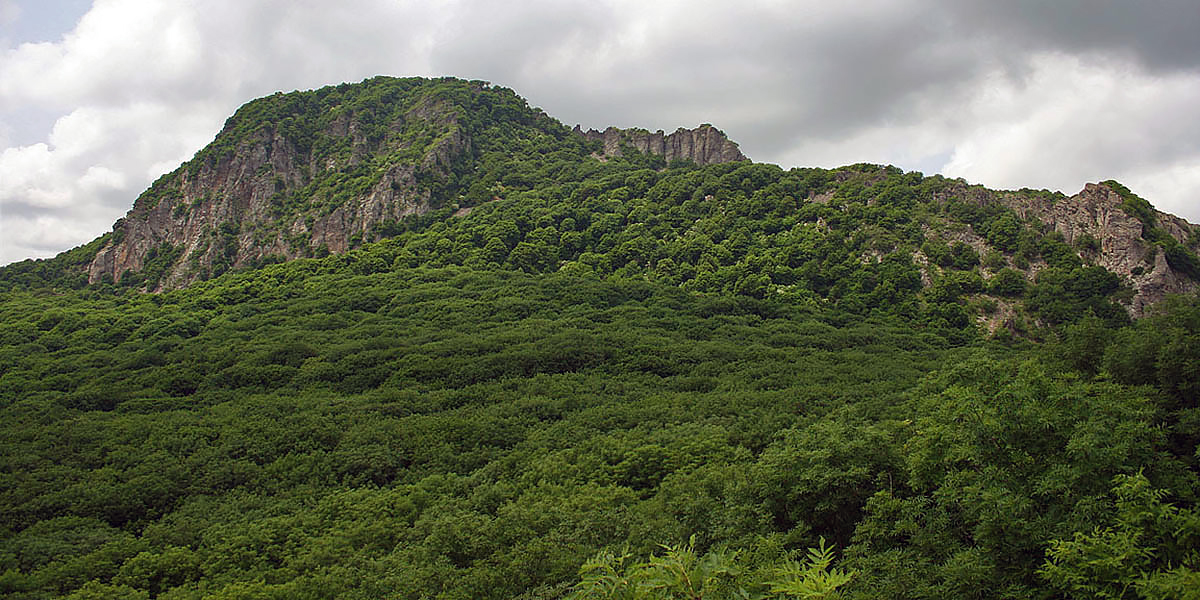 In the North Caucasus, near the resort town of Zheleznovodsk have low mountain Razvalka. Otherwise, it is still called the Sleeping Lion because it is very similar to the resting animal. For a long time this mountain has been linked Caucasian interesting puzzle. Despite the low height – only 720 meters above sea level, on its slopes there is an area of 1 hectare, of which the soil is never thawed. This occurs due to the cold air that is blowing at this location from the interior of the mountain. The depth of the permafrost layer reaches 9 meters. Even in the month of July, when the temperature rises to +30 to +35 degrees, the soil temperature is just + 6 ° C. Therefore, the vegetation here is the same as in the tundra. Near the southern beeches growing polar moss and dwarf birch.

In winter, a period of very severe frost of cracks Razvalki blow wind temperature 8 degrees. Because of this, on the slopes of the mountains in the winter in this place is green grass, and even some mature fruit (plum, for example). In summer, you can relax here, hiding from the heat of the day. How do we explain this amazing natural phenomenon? Just recently, scientists were able to uncover the secret of breathing “Sleeping Lion.” As it turned out, in the bowels of the mountains there are many voids, which somehow filled with cold air. In summer, when through the cracks in the slopes of the cold air coming out of the mountain at the bottom, on top is sucked warm air. It gradually cools down and down, and then back out. In winter, everything is exactly the opposite. That is just such a strange way Razvalka breathing.

Resembling an island permafrost is in the North of Romania in Bukovina. It is located on a hillside near the town of Suceava Petroshul.

Another natural “refrigerator” is located in the Pamirs in the area of Gorno-Badakhshan. Here in the vicinity of the village of Tajiks Yagit at the foot of one of the mountains is the entrance to the cave, which is the height of 2 meters and a width of 4 meters. Getting to the cave is very difficult: from its soil all the time blowing a strong cold wind. Even in the summer heat, the airflow temperature reaches 20 degrees. If you put a bucket of water at the entrance to the cave, it will soon turn into a block of ice. At the same time a few steps thermometer will show 40 degrees.

Where this is taken cold, no one can not yet explain. Probably, here it works the same principle, as well as on the mountain Razvalka. However, in this case, never warm air blowing. Moreover, it is very dry and there is no snow in the cave.

The same cave, but with smaller temperature amplitudes, have in the French Alps near the town of Lek. In the summer of her constantly blowing cold air, which brings in a vast valley freshness. In winter, warm air flows and raises the temperature. Because of this, can be grown in the open-air vegetables in local farmer’s valley all year round.

Require explanations and other natural phenomena. In the region of Lombardy in northern Italy is located entire Cold Valley. It is situated between Lake Iseo and Endino at an altitude of 340 meters above sea level. The climate and vegetation in the valley is typically alpine. Scientists have discovered there are more than 60 plant species that grow normally in the Arctic Circle. But until now no one can say why they were in the valley. This place is very popular among tourists.

Another unusual place – Liaoning. It located in the Province of China in the northeast. This “mysterious land” from June until the fall of the soil temperature is -12 ° C. In winter, in spite of all conceivable laws is heated to + 18 ° C. The locals have adapted to such conditions, and store food in the hot summer and winter vegetables are grown. Onions and herbs grow here every month. For many years, scientists vainly try to unravel the mystery of this amazing area.